Review: Under the Sugar Sun by Jennifer Hallock 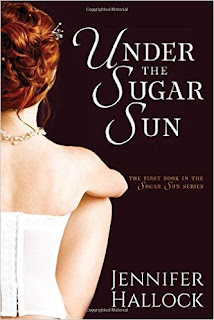 Shortly after arriving in the Philippines, the heroine of Under the Sugar Sun makes the observation that "the most dangerous part of colonialism was just how easy it was to get used to" (loc. 1279). Truer words were never spoken, and that's exactly why we need more romance novels like Under the Sugar Sun: because we are used to the ongoing symbolic violence that stems from colonialism. In our literary worlds, whiteness and Western settings are normal, and these things are not challenged as much as they could - or should - be.

So, even though it shouldn't be exciting to find a romance like Under the Sugar Sun, it is. The paternalism, casual racism and focus on the horrible realities of colonialism make it a difficult read at times and I do have mixed feelings about some aspects of their presentation, but I also feel like that's partly the point. And, quite apart from all this theoretical stuff, Under the Sugar Sun was also just a great romance, the kind that makes you feel squiffy in the stomach when you remember it at odd moments during the day.

It's 1902, and Georgina Potter has arrived in The Philippines, nominally to join her fiance in a teaching position on the island of Negros. However, she also has another agenda: finding out what happened to her brother, a US soldier missing, presumed dead, after the Balangiga massacre. While in Manila, she meets Javier Altajeros, a mestizo sugar baron and landowner from the village where she will be teaching. They rub each other up the wrong way; Javier thinks Georgina is an imperialist interloper, while Georgie thinks he's little more than a feudal lord, standing in the way of progress.

Once on Negros, the dynamic between them starts to change. Quite apart from having to deal with a conceited fiance and the prospect of being unable to find her brother, Georgina is adrift in a world she doesn't understand. But it's Javier's world, and helping her come to terms with it is a welcome relief for a man struggling with family responsibility, debt and a very uncertain future.

This historical background of the American-occupied Philippines was one of the most intriguing things about Under the Sugar Sun. Some readers felt that the level of historical detail detracted from the story at times, but I disagree; Georgie and Javier's story was so bound up in these circumstances that to lessen their prominence would have lessened the impact of the romance itself.

I also feel like the inclusion of violent and horrific acts on the behalf of the Americans - one in which a general orders all males over the age of 10 killed to stop insurgency, and another where the colonial authorities simply raze settlements to stop the spread of cholera - are important because they disabuse us of one of our central fictions about colonialism. We like to think that, after the initial dispossession or subjection, colonial overlords were mostly benevolent tyrants. We skim over any subsequent injustices so we can have a clear distinction between the racist then, and the patently not-racist now: Ah, yes we took their land away and poisoned their waterholes *mumble mumble* Stolen Generation *mumble mumble*...but look, it's all so far in the past now, or Oh, sure, we pillaged India and her people *mumble mumble* Jallainwala Bagh massacre *mumble mumble*...but wasn't that Ghandi guy really an inspiration to us all??

But such atrocities were still common occurrences in my great-grandparents' and grandparents' lifetimes, and they probably would have supported the 'pacification' measures described in the novel. The white characters in Under a Sugar Sun certainly do, and, while the reader is able to project most of her disgust and hatred onto Georgie's erstwhile fiance Archie, Georgie herself is not immune. It's conflicting at times, but kudos must go out to Hallock for not creating a sanitised heroine who somehow magically avoided any and all racist socialisation.

For most of the story, Georgie succeeds at walking a fine line between being a realistic woman of her time and being aware of the Americans' adverse impact. Her understanding and compassion towards her students and their families was my favourite aspect of her character, and I enjoyed watching her shed her prejudices and begin to challenge the status quo. I was disappointed that this character growth didn't continue through to the conclusion; in the last quarter of the book, Georgie became pig-headed and blind to the consequences of her actions. Javier saves the day, of course, but I was left feeling that he deserved better, or should have at least held out for some grovelling.

But Georgie never really grovelled, or apologised very much at all, and this brings me to the heart of my beef with her: as a white woman and American coloniser, the balance of power was always in her favour. Javier essentially just had to wait until she deigned to be with him, but she never really acknowledged this disparity, or attempted to redress it in any way. Instead, she was perfectly happy to reap the benefits of this situation. As realistic as that may have been, it made me angry.

It's the reason I abandoned my original 5 star rating, but I also acknowledge that I am probably being harsher than I would in other incidences where the characters and setting were more run-of-the-mill. Given the harsh social and economic realities the characters were living with, a level of self-absorption that I would normally find acceptable became much more difficult to forgive.

But, when I think back on the majority of the book, I remember that I did truly love Javier and Georgie as a couple. Their interactions were replete with humour and a sense of comfort gained from the others' presence, both of which carried over well to the bedroom.

Overall, Under the Sugar Sun was a exemplary reminder of all that I love in romance, and all I wish there were more of. It's grand in scope in the same way old-school romances were, but with a very modern presentation of race, class and gender. Between Javier and Georige's romance, the setting and the writing, it's a deeply affecting book and one that I'd recommend almost universally, no matter my gripes.

Having said all that, I do still have one burning question: If Javier's brother Andres didn't take a vow of poverty, did he take a vow of chastity?? Because that man needs his own romance, like, ahora.

EDIT: I've discovered that Andres will have his day!  Huzzah!
Posted by Unknown at 03:32