4.5 stars
Release date: 24/2/16
I received an ARC of this book from the author in exchange for an honest review. My opinion is my own. 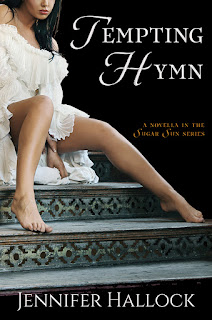 I have to admit, I was nervous about Tempting Hymn, because Hallock has set herself a mammoth task: telling the romance of a 'fallen' Filipina nurse and an American missionary workman recovering physically from illness, and mentally from the death of his wife and children, in only 152 pages. Even though I have read and loved both of Hallock's prior two works, where she tackles similar storylines in comparative depth, I'm still impressed at the way she has pulled it off.

Like the first novel in this series, Under the Sugar Sun, which I reviewed at the beginning of last year, Tempting Hymn manages to give adequate breathing room to the harsh historical realities of American colonial rule in the Philippines, while delivering a romance that is sweet, realistic and - above all - emotional.

Readers of Under the Sugar Sun will remember Rosa, the nurse assigned to care for Georgie's erstwhile fiance, Archie Blaxton. After the events of Under a Sugar Sun, Rosa gave birth to an illegitimate half-American son, Miguel, and was ostracised both by the people she had lived alongside her whole life, and the missionary community for whom she worked as a nurse. Despite the fact that she wants nothing more to do with American men, caring for missionary Jonas Vanderberg gives her a final chance to regain her nursing position at the local hospital, and give Miguel the life he deserves.

Having lost his wife and daughters to cholera, Jonas has nothing left to live for. The surly and insistent Rosa is only prolonging his misery, until he realises the unjust way that she has been treated. There's fight left in Jonas yet, but a perceived connection between Rosa and another American man will only hinder Rosa's attempts to get her life back on track.

The Rosa from Tempting Hymn is very different to the Rosa shown in Under the Sugar Sun. Partly, that's because she was irreparably changed by the events described there, but also because her side of the story humanises her. As a heroine, she's at once heartbreaking and eminently relatable. The way the world has treated her hasn't left her much room to be emotional, so she just gets on with what she needs to do.

Jonas is a salt-of-the-earth kind of guy. He decided to enter the mission field to impress his wife's well-to-do family, because, while he may not be an educated man, he can build anything, and the missionary movement needs jacks-of-all-trades as much as they need fancy preacher men. While I had initial concerns that his faith wouldn't sit well with me, the religious aspect was something that I valued most about this book.

As romance readers, we most often see representations and explorations of Christian faith in inspirational romances, but I want to make clear that Tempting Hymn is not an inspie. For a start, Rosa and Jonas would never cut it as a couple in an inspirational romance, because Rosa is Catholic, and she has no interest in converting. Secondly, I think Hallock's implicit focus here is the way religion is an ambiguous force. While Jonas is a man of God from the 'love thy neighbour' school of thought, the missionaries are able to justify the wrongs of colonisation because they are saving the heathen Catholic Filipinos, just as people - both Catholic and Protestant - use religious doctrine to ostracise Rosa (but not the man who got her pregnant, because of course not!).

In this - and in other aspects of the book - Hallock highlights the way that repressing and proscribing sexuality adversely affects both women and men. Rosa and Jonas' tentative first love scene, where they are figuring out one another and themselves, was exquisitely done. In fact, all the sex scenes here are insanely hot, just like in Under a Sugar Sun.

Ultimately, just like in her other books, Hallock doesn't pull any punches in Tempting Hymn, with either the romance or the historical detail. She does her setting and her characters justice, delivering a story that is raw and unflinching, but never too dark, because it has an engaging and touching romance at its core.
Posted by Dani at 13:59