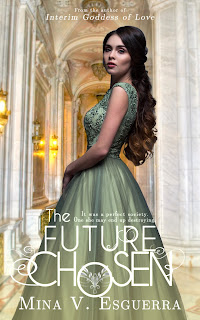 Like many people, I started 2017 uneasy about the world political environment, and I chose my first read of the new year - Mina V. Esguerra's The Future Chosen - because I liked the subtitle 'a political romance'. I wanted that alternate political reality where I was sure that everything was going to be okay. However, I didn't anticipate how invested I would be in the process of getting to that HEA; it's a month later, and I'm still recovering from this star-crossed romance.

To prevent political dynasties, the fictional country of Isla has a law where only one person from each family can hold political office, and Lourdes and Andres both have their families' political ambitions resting on their shoulders. They should be thinking about their bright political futures - and they are - but they are also thinking about each other, which is a problem: the only way they could be together is if one of them gave up their place in politics. Since neither is willing to do so, they're at an impasse. There's no point pursuing a relationship that's going nowhere - especially one that could destroy their careers - but somehow they just can't seem to give each other up.

Starting with Andres and Lourdes' time in a school for future public servants, The Future Chosen is relayed in a series of short-ish installments, with time-jumps in between. We see Lourdes and Andres together, going their separate ways, and then finding their way back to each other again.

Partly because of the episodic narrative structure and time jumps, Esguerra uses the introduction to warn the reader that The Future Chosen is different to her other works, and she's right. I am a big fan of Esguerra's contemporaries, but here she has constructed something that feels high-stakes in a way that I have rarely encountered. I loved the suspense of not knowing how everything was all going to play out (even though I'm usually the kind of person who reads the back page to make sure that things turns out alright!). Maybe this change of tone won't work for everyone, but it certainly did for me.

I think I was able to immerse myself so completely in Lourdes and Andres' romance because it had a fictional setting - which gave it some distance from the overwhelming hopelessness that can accompany the real world - and yet it was also relevant and familiar. Esguerra is clear that the nation-state of Isla is not the Philippines, but there were some similarities. However, the idea of an anti-dynasty law, while having particular resonance in the Philippines, is also one of universal relevance: think the Kennedys, the Nehru-Gandhis, Trump appointing Jared Kushner as his advisor.

Esguerra conducts an extremely nuanced discussion around her anti-dynasty law, called the Mayo-Matias law. As the old saying goes, one man's utopia is another one's dystopia, and the certainly has dystopic undertones for Andres and Lourdes' freedom to choose their partners and careers. There is also the question of whether it exchanges one type of gatekeeping for political positions for others. Andres muses that:


While the law that prevented him and Lourdes from marrying, once they were elected, had its staunch supporters, it was also a law that made their democracy less…democratic. It prescribed a path for public officials, defined the qualifications, in ways that could be abused, and that excluded some of the nation’s best and brightest. It was a program that was meant to level the playing field but Andres believed it bred, programmed, rewarded certain types of individuals.

The counterpoint to that view is provided right at the beginning of the novel:


Mayo-Matias Law has not kept power, money, and fame away from those who may abuse it, but we know what it has done—it has restored our trust in those who serve us....We will not find better candidates by lowering the score requirements, allowing privately educated entrants, or by amending the law in any way. Give an inch, and we let in doubt. We erode what MML has given us: faith in public servants.

There was one last aspect of The Future Chosen that I absolutely adored, and that was the way it was unconstrained by gender stereotypes. When a couple's career ambitions come into conflict in the real world, it is often the woman who makes the sacrifice. Here, there was not even the slightest hint that - as the woman - Lourdes would or should be the one to give up her career in favour of Andres' (although, admittedly, perhaps this is because it is a decision that doesn't just affect her, but would require a political freeze to be placed on her whole family). If anything, Lourdes has a stronger claim to having a political career, given that she is a granddaughter of a former president, while Andres' family have only held middling-level positions. Of the two of them, Lourdes is also the more pragmatic and unemotional, while Andres is the one upset by their parting of ways, and more invested in their relationship.

But it's possible I was even more invested than Andres. The Future Chosen was suspenseful and sweet and clever and just so good, and I didn't want it to end. The ending is more of a HFN with hope for a HEA than an actual HEA, which makes sense, because the characters haven't entirely overcome everything keeping them apart. Even though I understand that and I think - objectively - it was the right decision, I still feel a slight lack of closure from that little question mark hanging over Andres and Lourdes future. That's my problem, though, and not the book's.

I really hope that Esguerra expands this world (although I'm not sure that she will, because this was inspired by discussion around an anti-dynasty law in the Philippines). The world-building is so strong, the tone worked so well for me, and - of course - it would mean that we could see Andres and Lourdes further in the future.
Posted by Dani at 04:43